iPhone vs. Android For Business 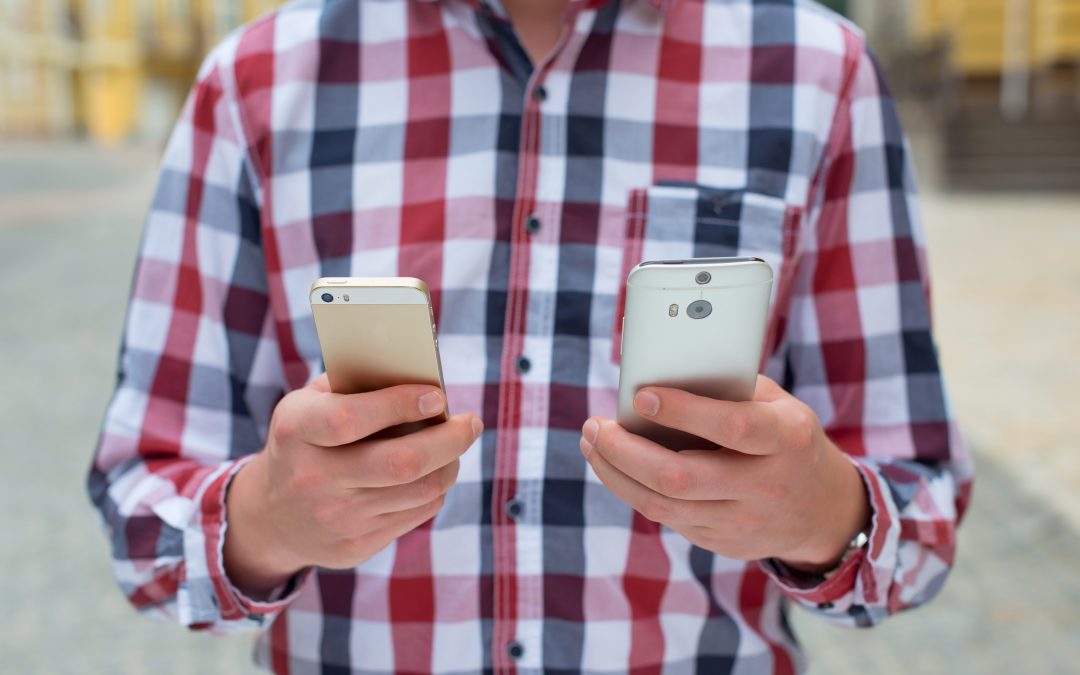 Personal digital assistants (PDAs), or handheld PCs, were once popular options for employees. But the increasing shift in technology adoption and usage is forcing many businesses to turn to the use of smartphones.

However, most businesses have encountered the dilemma of picking the best mobile OS for business. Choosing between iOS vs. Android for business means looking at the hardware, cost, security, and software features. Ideally, you want an option that makes your team productive and efficient.

We’ll guide you on making the decision between using an iPhone for business or an Android for business.

Which Is Easier To Use: iPhone Or Android?

When iPhone devices first appeared, Nokia Symbian and Windows mobile phones were the competition. However, iPhone was quick to beat them because it was easy to use. So, the question is, is iPhone easier to use than Android, or is Android easier to use than iPhone?

Today, both iPhone and Android devices are easy to use. Android, however, gives you more control than iOS. Of course, there’s a learning curve if you have never used any of the OSes. For business use, the choice of an OS largely depends on user preferences, and employees tend to go for iPhones. So in a way, both of the phones are easier to use. When you look at the home-screen setup and appearance, Android feels somewhat a great option, and it offers more features for power users. iPhone, on the other hand, is more streamlined, and many people are familiar with it.

Well, are iPhones easy to use? iPhones are user-friendly as they allow you to do everything quickly. Also, their interface is considered the best-looking when compared to Android. However, the iPhone is limited when it comes to customization.

Your smartphones should just be as secure as your business computers. Both operating systems have had high-profile security issues over the years. Nevertheless, Apple seems to do more to keep their devices secure and your data private than Google.

So, is iPhone more secure than Android? You could say that, but your device’s security also depends on how you or your employees use the smartphone. For example, using public internet connections pose a risk of getting hacked or facing malicious attacks.

Unlike Apple, Google is more lax about what applications get approved to its app store. At one time, the tech giant reported that 0.16 percent of all the apps had malware. Even so, the Google Play Store is still a secure way to get apps.

Is iPhone safer than Android? iOS boasts a better security reputation than Android, but it’s far from being unhackable. One great thing about the OS is good legacy support. Older versions of the iPhone continue to get firmware and security updates to ensure they’re safe.

Regarding Android, it’s widely used by different phone manufacturers. This widescale use might be problematic since some flagship models ship with different versions of Android. It takes time for manufacturers to update some of the versions, and this might present security holes for malicious attacks. On a positive note, the open-source nature of Android means security risks are discovered and fixed quickly.

As noted before, your device’s security also depends on how you use it. Monitoring your business network systems and implementing a solid corporate-owned device policy should help boost your security.

iOS vs. Android For Productivity

When looking at work experience and productivity, Android seems to have the edge over iOS. But then again, it depends on what you’re using the device for.

On storage, Android productivity seems to win again. Unlike the iPhone, you can extend the storage capacity of your Android device using a microSD card. Android also offers Google Drive to store everything from photos to work files. iPhone also has the iCloud service for storage, but the free tier only offers 5GB, compared to Android’s 15GB.

Regarding iPhone productivity, you can quickly get Microsoft office on iPhone as it’s free to download on the App Store. You can create, view, send, and edit Office files using the app. This also applies to Google Docs on an iPhone. You can use the Google Docs app to share files and collaborate with your team.

Both OSes offer different features and apps for boosting productivity. For example, Google Voice (available on Android and iOS) converts your voicemails into texts or emails for you to read later. You can also turn off notifications to avoid distractions or use voice assistants to make calls or access information on the go. They also both have split screen capability, but it’s easier to do on most Androids.

Regarding mobile technology, each of the OSes excels in some aspects. For example, iPhone has continually outperformed Android in software technology. iOS is a unique system that is only used on Apple devices and systems. Apple also beats Android in releasing timely updates for its software.

Older supported iOS devices continue to get functional improvements to offer additional software features. On the other hand, Android devices that are more than a few years old generally don’t get such software improvements, and one might need to get a new phone to get the updates and features they want.

The topic of Android apps vs. iOS apps is also an area worth looking at when comparing the two OSes. iPhone has better app selection than Android for a good reason. Most app developers make more money with iPhone apps, so you get more apps and premium app features with iOS than Android.

But some apps are specific to each of the OS. For example, Apple’s iTunes is only available on iPhones. But this difference is insignificant as you can get alternatives for your Android device.

Regarding iPhone vs. Android hardware, Android has a vast hardware diversity. Apart from Apple, nearly all mobile phone manufacturers use Android on their devices. This means customers have access to a variety of phone options with many different sizes and shapes. You can choose a phone with a high quality camera, a built in keyboard, an included stylus, or many other features.

With Android, you can get a big-screen phablet like Google Pixel 4 XL, the latest and greatest model, such as Samsung Galaxy Note 10, or a small cheap option like a Moto E6. Android’s hardware compatibility, however, doesn’t keep up with iOS’. iPhone’s Continuity feature lets you connect your device to an iPad or Mac. This only works across Apple devices, however. One issue with iPhones is the removal of the headphone jack, which limits you to Bluetooth earphones.

When considering building an app for your business, Android vs. iOS development might present a dilemma. You want to look at your target market, cost of development, time, and difficulty. Android apps are developed in Java, while iPhone Apps are developed in Apple’s Objective-C language, which is simple to learn if you understand C and C++ languages.

Android app development might be complicated due to the variety of devices that it supports. Some devices might have different needs and features. It’s also time-consuming. However, it offers better testing tools than iOS development. Android OS is also more versatile, and it allows multitasking.

When looking at the Apple vs. Google ecosystem, it’s vital to understand each OS’s features, benefits, and cons. Picking the right operating system for your business can boost productivity and improve efficiency. But then again, your employee’s preferences also play a role in decision making.

Regarding iPhone vs. Android prices, Android offers a wide range of phones, ranging from dirt cheap devices to high-end options. iPhones don’t have as many options, and they tend to cost more, so it’s a matter of planning your budget and determining the number of devices you want. You’ll also need to consider if you’ll be replacing the devices sooner.

Whichever phone OS you decide to go with, there’s one more thing you’ll need to make it complete – a phone plan designed for businesses. So why not choose Teltik? It’s compatible with pretty much every Android and iOS phone, and it has many features specific for businesses. Go and give us a try today!